Today’s spotlight highlights the talented Ray Brooks, who kicked off his first class at the studio this week. 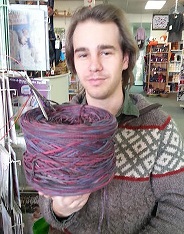 How did you first learn to knit?

I was a poor college student. It was around Christmas time and I didn’t really have any money to buy presents for people, so I decided to learn how to knit so I could knit a scarf for my mom.

What was the first thing you ever knit?

Like many beginning knitters that don’t know better yet, my first project was a garter stitch scarf with Lambs Pride “homespun” and slippery metal needles. I ended up keeping the thing because it was too ugly to be a gift.

What is your best knitting memory?

My first fair isle project was a hat I knitted while on a road trip with my older brother. We explored the western coast from LA to Seattle, and back, camping along the way.

It was stocking season, which put me up to my ears in knitting, and I knitted half a stocking, before realizing it was about 2 inches too wide. While boiling a pot of water for corn, the idea occurred to me to steam the failure, and see if it got me anywhere. (It might be worth mentioning here that this yarn was mostly acrylic.) I held the stocking over the pot of water to no avail and, in my frustration, dunked it right in the boiling water. I’ve never seen something turn so ugly so fast. It melted, and stretched to an unrecognizable form. Needless to say, I cast on with smaller needles later that night.

What’s on your needles right now?

I have a sweater on needles that I am finally making progress on. (It was in time out for a while.) It’s lovely yarn, and fun to knit, but I always have smaller projects on the side. I have two pairs of sox going, both almost complete.

What is your favorite place to knit?

One of the best things about knitting is that you can do it just about anywhere. As long as I have my needles, I am happy.

What are your favorite kinds of knitting projects?

I like to knit garments, particularly for other people, and socks for myself. I’ll knit just about anything, though, so long as it has something to keep me interested.

What is your most irresistible fiber temptation?

Just a good hearty wool. Rustic, but elegant. Crunchy, sturdy, and not over-processed. I like my yarn to have some good stitch definition, too. You just know it when it’s in your hands.

What’s your best advice for beginners?

Today’s teacher spotlight highlights Beth, who has a great array of classes planned for the…

Today’s teacher spotlight highlights Martha, who brings to the studio a wealth of knitting knowledge…

Today’s teacher spotlight will highlight Kathryn who, in addition to teaching at 614 Knit Studio,…